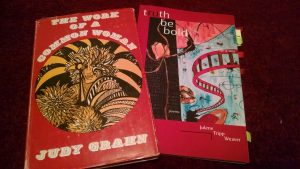 In the late 70s I read, The Work of A Common Woman: The Collected Poems of Judy Grahn 1964—1977, her poem, A Woman is Talking to Death, inspired me to start a long deferred dream to write poetry. It wasn’t possible to write when I was a teen, my uncle discourgaged me because he thought poets were not a good role model for a young girl.

Judy Grahn’s book was published during a time when there was a surge of lesbian poetry and women’s bookstores, Inspired by the power of her writing, I joined a poetry group, joined the Feminist Writers’ Guild, and applied to an undergraduate program in Creative Writing at Hunter College where Audre Lorde taught. Enrolling at the City University of New York (CUNY) also allowed me to study with Joan Larken at Brooklyn College.

I am thrilled that my book, truth be bold—Serenading Life & Death in the Age of AIDS, is nominated for the 2018 Goldies by the Golden Crown Literary Society. And, the very best part is that my book is on the 2018 Goldie Nomination list with Judy Grahn’s new book, Hanging On Our Own Bones! Being on the same list with my heroine is a tremendous honor.