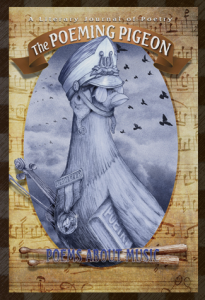 My poem, “In Our Strange Home,” was published in the latest volume of The Poeming Pigeon: Poems About Music! I was very excited to join a group of readers in Portland, Oregon to share my poem and two other music related poems from my second book, No Father Can Save Her. It is refreshing to be part of a group of poets who come together to share a passion.

The poem they accepted is about a Monkees concert I went to in July 1967, back when I was a teeny bopper. While researching for my memoir, I uncovered Jimi Hendrix had a short stint where he was the lead performer before the Monkees went live. Davy Jones liked his guitar playing and invited him on tour with them. Jimi quit because he was not appreciated by the young girls who chanted, “We want the Monkees,” while he performed. Embarassed to say, I was one of those girls. Within the next couple of years I fully knew who Jimi Hendrix was, especially after he performed at Woodstock, so this fact of my life was a revelation. My Woodstock story was another poem I read that night.

The internet lists the Monkees schedule, and it was a great surprise to learn this history, which is a blank in my mind. Memory is not the most accurate recorder of our life. We often rely on stories others share and remember the telling of their stories. The great thing about writing is how it leads to self-discovery and how we have the ability to craft and sometimes even rewrite our stories.

I’m delighted my poem has found a home with so many great music memories.

Don’t forget my next book, Truth Be Bold—Serenading Life & Death in the Age of AIDS is in presales now!! Order here.